‘It’ Review: A Terrifying Adaptation of the Classic Stephen King Novel

Well, that was both funny and terrifying, yet it was one of the best horror movies to come out in recent memory!

‘It’ starring Bill Skarsgard, Finn Wolfhard, Jaeden Lieberher, Sophia Lillis and Jack Dylan Grazer, is the second adaptation of the classic Stephen King novel of the same name. ‘It’ follows a group of bullied kids called “The Losers’ Club,” as they attempt to stop a terrifying, child killing monster known as Pennywise. 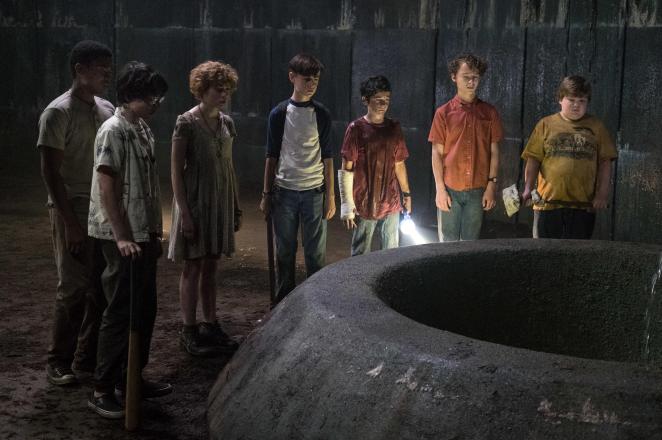 To begin, I was worried before I saw this adaptation of one of my favourite novels of all time. There was so much hype built around it, that it got to the point where people would attach red balloons to sewer grates all around major cities in Australia. Also, so many people loved the mini series adaptation, but for me, the only good part about that was the performance from Tim Curry, which was amazing. So, I was worried going into it. But as soon as the end credits started to float up on-screen at the end, I was a very happy man. Not only was this a faithful adaptation of the kids section of the novel, but the execution from all involved, especially director Andrés Muschietti, has made this one of the best coming-of-age/horror movies to come out in recent memory.

Now, lets get this out-of-the-way. Bill Skarsgard was amazingly creepy as Pennywise. His nuanced performance was able to stand on its own against Tim Curry’s performance as Pennywise in the 1990 miniseries, which is a very iconic performance. His presence throughout is felt by not just the characters on-screen, but also us, the audience, which is definitely a positive. What he does with his eyes in particular is very creepy, especially the first time you see him. Bill Skarsgard had managed to creep out everyone in the cinema and I love that.

The child performances in ‘It’ were amazing. The standout for me was Finn Wolfhard (from the amazing Stephen King inspired Netflix series ‘Stranger Things’) as Richie. He was pretty much the comic relief in the movie (as he was in the novel) and it worked so well. He had the energy and charisma to make him a very likeable character which is a positive. Jaeden Lieberher was also great as Bill, the leader of the Losers’ Club. With his tragic opening scene, we get an understanding for what his character is going through and why he truly wants to fight and kill Pennywise.

Sophia Lillis was great as Beverly, the girl in the group. She really reminds me of a young Amy Adams which is definitely a positive and some her scenes had a lot of emotion which really made us feel for her. The other standout was Jack Dylan Grazer as Eddie, a boy with a very over-protective mother, which when we first saw her telling Eddie to be careful of freshly mowed grass, the person siting next to me said: “Okay, now she is the creepiest part of this movie.” Everyone else was also damn good in the movie and this along with ‘Stranger Things’ has made me remember how good child performances can actually be, which really makes me angry when people just say that child performances always suck.

The direction from Andrés Muschietti was amazing. He manages to transport us into this terrifying world with ease and he successfully shows us this world from the view of the children, which is even better as the adults in ‘It’ are really weird and creepy. But he does manage to make a movie which really feels like an 80s coming-of-age movie mixed in with great horror elements which works really well.

The cinematography by Chung-hoon Chung (best known for his stylistic vision, including the Korean classic ‘Oldboy’) is beautifully done. You really get to see the best of his work when the movie goes into the sewers which really gets all of the filth and darkness of a terrible place. But it is a visually stunning movie and that really elevates the movie into a high place.

The music was very chilling throughout the movie. With hints to classic composers such as Jerry Goldsmith, this soundtrack was both epic and hair-raising. The sound design was also great and was one of the better horror movies to have really great sound design. From the chilling echoes of Pennnywise to the gushing of blood, it was a treat for the ears.

The only real negative I had with ‘It’ was that I wished they fleshed out a couple of the characters a little more, especially the characters of Mike and Henry. At the start, I thought Mike was going to have a much larger role then I originally thought, but as soon as he gets into the Losers’ Club, he is more of a background character which slightly disappointed me. With Henry, I feel like they could have had a couple more parts from the novel that truly make him a third-dimensional bully. I’m not saying his character wasn’t interesting, but I feel like we could have used a little bit more of him and just fleshed him out a little more.

Overall, ‘It’ managed to live up to the crazy hype that has surrounded it since early last year. With amazing performances from it’s child focused cast and Bill Skarsgard, great direction, well-written characters and enough creepiness in it to make your hair raise, ‘It’ is a great coming-of-age/horror movie that deserves all of the praise that it is receiving. Also, it is easily in my top five Stephen king adaptations so far.

One thought on “‘It’ Review: A Terrifying Adaptation of the Classic Stephen King Novel”