Music and movies go together like wine and cheese. They both elevate each other in ways that are both magical and memorable. But what I really love about music in movies is how it can result in some of the most memorable movie moments of all time. From songs that annoy the characters to the songs that set the atmosphere for the movie, the perfect song choice can be brilliant.

Today I’m here to countdown the best uses of music in movies. To be clear, this list won’t include musicals as I have that list in the making for a later date.

As always, I have some honourable mentions to hand out before I begin. These scenes are made even greater with the choice of music but they just aren’t as brilliant as my top 10 picks.

Danke Schoen/Twist and Shout – Ferris Bueller’s Day Off: Easily one of the most iconic scenes in movie history, this is a fun, dance-worthy scene that has become a staple of 80s cinema.

Hocus Pocus – Baby Driver: A movie that could easily fill up the entire list, ‘Baby Driver’ uses music like no other and the on-foot chase sequence to this fast-paced instrumental was the best in the movie.

You Always Hurt The Ones You Love – Blue Valentine: How can such a depressing movie have one of the most beautiful scenes of all time? By having Ryan Gosling play the ukulele while singing to Michelle Williams. It’s hauntingly beautiful and made only more devastating by knowing the eventual outcome.

Happy Heart – Shallow Grave: Danny Boyle knows how to end a movie and by using a love song to sum up love, greed, murder and betrayal, it strangely suits the tone of the movie.

Hurdy Gurdy Man – Zodiac: To open a movie with the Zodiac killer shooting up a couple of teenagers in a car to this haunting piece of psychedelic/folk/rock music lets you know what you are in for. It perfectly sets the tone of the movie.

The Times They Are A-Changin’ – Watchmen: Easily one of the best opening credit sequences ever made, this five-minute sequence that chronicles the rise and fall of superheroes and the way America changed over a few decades is amazing.

Where Is My Mind – Fight Club: All I can say is that to have a song that perfectly fits with the tone of the movie and ending with it is brilliant.

Blue Moon – An American Werewolf In London: I never thought that a slow piece of rock would be the perfect song for a werewolf transformation.

Goodbye Horses – The Silence Of The Lambs: I may have said this before but I’m going to say it again. It’s hauntingly beautiful.

Stuck In The Middle With You – Reservoir Dogs: Only Quentin Tarantino could make a torture scene both darkly funny and masterful at the same time.

10. Hip To Be Square – American Psycho

Hey Paul! Let’s kick off this list with one of the best examples of dark comedy I’ve ever seen. Most importantly though, it also has one of the best uses of a song in a movie. At the end of the first act of ‘American Psycho’, we are treated to what is one of the most infamous movie scenes of all time. Everyone’s favourite psychopath, Patrick Bateman (Christian Bale), takes a very drunk Paul Allen (Jarod Leto) back to his apartment and informs him about the band Huey Lewis & The News. As he does this he grabs an axe, puts on a raincoat and plays the song ‘Hip To Be Square’, an “undisputed masterpiece” as Patrick says. We are then treated to a couple of great one-liners and a gruesome murder. It’s pure brilliance and the song makes it even greater.

David Lynch is one of my favourite movie/television directors of all time and ‘Blue Velvet’ is my favourite in his excellent career. But the reason for this is because of the nightmarishly beautiful scene that occurs around the half-way point of the movie. As Jeffrey (Kyle MacLachlan) is taken around town by Frank (Dennis Hopper), who is easily one of the most terrifying movie villains of all time, they stop by what is essentially a brothel. There the pimp puts on a lip-sync performance of the Roy Orbison song ‘In Dreams’ and it seems like Frank gets him to do it every time he comes there. It’s a stunning moment with Dennis Hopper showing off a wide range of emotions without saying a word and it goes even deeper into the dream-like world that David Lynch has created.

Moving onto one of the most parodied movie scenes of all time, this car sing-along is a great opening scene. By having our favourite music duo drive around town as they pick up their friends while singing and headbanging along to Queen’s magnum opus, we can already tell how much we are going to love these characters. It allows us to understand how relatable these characters are and why they love music so much. You can’t help but headbang to the second guitar solo in ‘Bohemian Rhapsody’ after watching this scene.

The second Queen song to appear on this list, ‘Don’t Stop Me Now’ became one of my favourite songs of all time because of this scene from the superb horror/comedy, ‘Shaun of the Dead’. Signifying the beginning of the third act and the actions for every character from this point onwards, this is how you make a scene about a bunch of people trying to kill a zombie entertaining. As Shaun (Simon Pegg) and the other survivors make it to the Winchester (the pub that they always go to and their safe haven for the zombie apocalypse), they encounter a major problem. The pub has been surrounded by zombies and now they have to kill the zombie owner of the pub with pool cues while ‘Don’t Stop Me Now’ plays on the jukebox. It’s hilariously entertaining!

6. You Never Can Tell – Pulp Fiction

I could easily fill up this list with scenes from a Quentin Tarantino movie but I still feel like no other scene of his has managed to match the simplicity of Mia (Uma Thurman) and Vincent (John Travolta) dancing to the Chuck Berry classic in Jack Rabbit Slim’s twist contest. It’s such a simple scene but the execution of it is masterful. As the two continue to dance, we start to feel their chemistry with each other as well as some sexual tension between them. It’s a scene that you can’t look away from (even though it’s just two characters dancing) and it reminds me of why I love cinema.

I absolutely love Danny Boyle’s ‘Trainspotting’ and the overdose scene is one of the most beautiful and iconic scenes of the 90s. As Renton (Ewan McGregor) indulges in some Heroin, he overdoses on it and we are treated to an almost dreamlike scene. Lou Reed’s beautiful piece, ‘Perfect Day’ plays over and it’s simply brilliant. It fits in with the tone of the movie and it even acts as symbolism for how the characters have a perfect day with heroin in their lives. It signifies a turning point for the protagonist and it’s a jaw-dropping sequence.

Like Quentin Tarantino, I could easily fill up this entire list with entries from a Martin Scorsese movie. I could literally fill the list up with scenes from ‘Goodfellas’, which happens to be in my top three movies of all time. I was going to choose the excellent tracking shot put to ‘Then He Kissed Me’, but I have decided to go with the moment that signifies the “no going back” part of the movie. As the piano kicks in, we are shown a series of murdered characters showing up in different parts of the town. From here, we immediately understand why Henry (Ray Liotta) can’t go back to his old life. It’s a genius moment of filmmaking and only Martin Scorsese could pull it off.

2. Ride Of The Valkyries – Apocalypse Now

When I was talking about parodied scenes earlier on, none have come close to the masterful village attack scene in ‘Apocalypse Now’. If you haven’t seen ‘Apocalypse Now’, you would of at least heard about this scene. As Willard (Martin Sheen) makes contact with Kilgore (Robert Duval), a lieutenant who can take him and his men to a river so they can progress on their mission, they have to first take a village held by the Viet Cong. As the army of men and helicopters attack the village, ‘Ride of the Valkyries’ plays over their speakers so they can frighten the Viet Cong. It’s a masterful action scene that has been parodied to death and it’s still as great as it was almost 40 years ago. 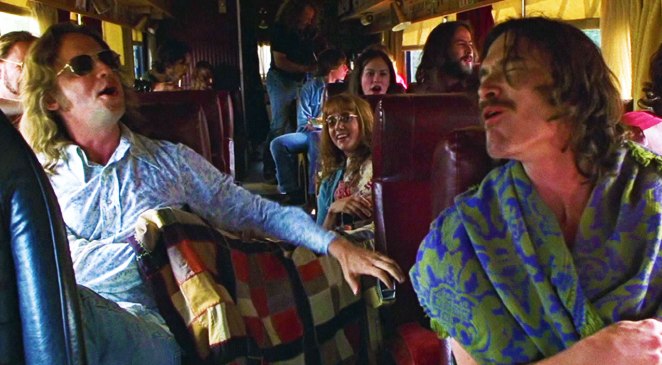 At last, we have reached my number one pick and you just can’t beat the bus scene in ‘Almost Famous’ as all of the characters start to sing-along to Elton John’s ‘Tiny Dancer’. First of all, this scene digs into my heart every time I watch it. After a rift between the band members tears them apart for a night and Russell (Billy Crudup) is picked up from a teenage house party the morning after, they all sit in silence as ‘Tiny Dancer’ plays over the radio. One by one, they all start to sing-along and all of the problems that they had with one another have vanished and they all love each other again. It’s a powerful scene that shows us how music can bring everyone together, even if they might have just hated each other. But the icing on the cake is the chilling dialogue from Kate Hudson: “Shhhhh…you are home.” It’s a heartwarming scene that will make you happy no matter what. Because of all these reasons, this isn’t just one of the greatest movie scenes of all time, it’s also the greatest use of music in a movie of all time.

There you have it, another top 10 list done and dusted. I hope you enjoyed reading it and as always if there is a scene that I left out, please let me know in the comments below. Thanks!