‘American Animals’ Review: The Most Audacious Heist Movie of the Decade

When a movie opens with the words, “This is not based on a true story. This is a true story,” you know you’re in for something special.

Set in Kentucky in 2004, it follows the crazy true story of four young men who attempt to pull off one of the most audacious art heists in US history.

Before I watched ‘American Animals’, I had never even heard about the Transy Book Heist (the heist this movie focuses on). So going in I didn’t know what it was going to be like and what was going to happen. Once the credits rolled I knew I had not only seen one of the best movies of 2018, but also one of the best heist movies of the 21st century!

First of all, writer/director Bart Layton has done a fantastic job at crafting a heist movie with documentary elements thrown in throughout. That may have slightly confused you when I mentioned documentary elements thrown in, but this could technically be classified as a documentary. Throughout the film, there are interviews with the actual men who came up with the heist (Spencer Reinhard, Warren Lipka, Eric Borsuk and Charles Allen), as well as some of their family members and teachers. This gives the film a unique style of storytelling as each of four men tell their version of the story, so some scenes may slightly change when they come back later in the film, depending on what is said during the interview. It’s similar to the style shown in ‘I, Tonya’, but unlike that film, this actually used the real people involved in the events being shown. 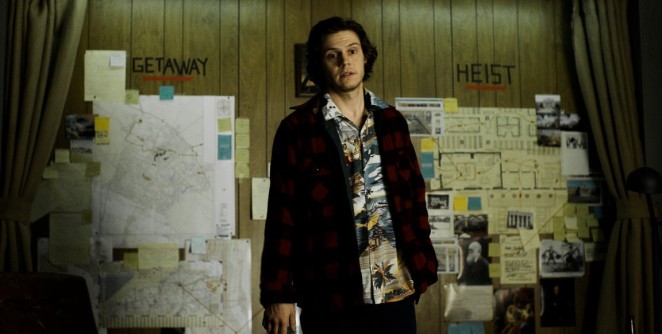 Speaking of the people involved, the performances are amazing. Evan Peters shines as Warren Lipka, the mastermind behind the heist. Peters brings a high level of energy into this character who is basically the wildcard of the bunch. Peters does a fantastic job at playing a character who you find unpredictable and even slightly crazy, but you can’t help but sympathize for him. I also love that this role really shows off more of Peters’ acting capabilities and it helps with one of my statements saying he is one of the most underrated actors working today.

Barry Keoghan is also fantastic as Spencer Reinhard, Warren’s best friend and the one who told him about the rare books they want to steal. Keoghan is fantastic at playing a “quiet” character, due to his physical performance. Although he does have a lot of dialogue, it’s the quieter moments that make him stand out.

Jared Abrahamson and Blake Jenner are also terrific as Eric Borsuk and Charles Allen. Abrahamson is great at playing the calm, yet more easily stressed person in the group. He does a fantastic job as what you could consider the true planner of the heist. Jenner is also great in his role as the more sensible member of the group. Although he isn’t given as much dialogue/screentime as the rest, he is still fantastic.

Another great positive is the script from Bart Layton. I would imagine that writing a script about a true story, while also basing it around different interviews wouldn’t be an easy feat. Yet Layton has done an incredible job at writing one of the best scripts of 2018. The dialogue feels (and most likely is) real, the characters and their choices are real (which leads to some of the best parts in the film), and it’s brilliant. It’s a perfect balance of subtle comedy and intense drama. Seriously, the writing is brilliant!

I should also talk about the editing (which is definitely the best I’ve seen so far in 2018) and the great cinematography. The editing is sharp, precise and it knows what you want to see. From the first shot, I knew this would be one of the best-edited movies I’ve seen all year. The heist itself is one of the best shot and edited scenes I’ve ever seen. This also brings me to the cinematography, which is really good. The opening scene is made up of a lot of extreme close-ups, which gives you an idea of how the movie will make you feel throughout. There are also some great long takes, with the most memorable being a spoof of ‘Oceans 11’. Going back to the heist scene without spoiling anything, there is this change in cinematography that is simply brilliant.

I’m struggling to find a negative as this is easily one of the best films to come out in 2018 and hardly anyone has seen it. So this is me telling you (actually demanding you) to find a copy of this underrated gem and watch it as soon as possible. It’s really damn good.

Overall, ‘American Animals’ may just be the best and most audacious heist movie to come out this decade. The way Bart Layton combines a feature film with a documentary is one of the most original styles of filmmaking I’ve ever seen and it never wastes a minute. With terrific performances, a captivating story and incredible editing, ‘American Animals’ is a heist movie that knows how to tell a crazy true story, while also keeping you entertained for its almost two-hour runtime.