‘Vice’ Review: A Dark Biopic With an Unrecognisable Christian Bale

It follows the epic life of Dick Cheney (Christian Bale), a bureaucratic Washington insider who quietly became the most powerful figure in the world while acting as Vice-President to George W. Bush.

Going into Vice, I didn’t know what to expect. It was the latest film by Adam McKay, who is known for his comedies, like Anchorman and Step Brothers. When he made The Big Short back in 2015, I started to see how he was able to successfully blend drama and comedy together in a tight and enjoyable package. Now he has crafted a biopic based around one of the most powerful men of all time, and Christian Bale put on yet another massive amount of weight to play Dick Cheney. I was both excited and worried to see how this would play out. Then I saw how McKay was going to tell this story, and I fell in love with it.

Adam Mckay‘s direction is easily some of the best of 2018. Everything about this direction is wild, yet it strangely suits the chaotic nature of the film. One thing I loved about Mckay‘s direction is how unique it is, compared to your average biopic. It breaks the fourth wall at times (similar to The Big Short), it‘s non-linear, and there’s a hilarious scene in the middle of the film that pokes fun at happy endings.

As I just mentioned, the story is non-linear, which is perfect for this type of direction. The film actually starts with one of the most confronting events in history and then proceeds to go all the way back to an earlier decade. It continues doing this throughout different stages of Dick Cheney’s life, and the more flashbacks we get to see, the more we get a deeper and detached look into this man’s life.

This leads me to the most controversial part of Vice. Mckay decided to study these characters from a biased look, resulting in us seeing the worst parts of these powerful people. If you happened to love these people back then and even still today, then you may not like this approach. It‘s disturbing at times how these people had so much power, to the point that they could commit illegal things if they felt like it. Personally, I loved this approach as it resulted in a darker and more compelling biopic. If this wasn’t a biased film, then I feel like it would have been way too safe and a less compelling biopic.

Speaking of characters, everyone here brings their A-game. Christian Bale is Brilliant as Dick Cheney. Bale has given what is arguably his best performance yet as this powerful figure. Thanks to his will to gain massive amounts of weight for a single role (and some incredible make-up), he is completely unrecognisable in this role. You can believe he is scheming inside his head while remaining calm and composed on the outside. Everything else from the way he talks, to his hand movements, makes this one of the most believable performances of 2018.

Amy Adams is also fantastic as Lynne Cheney. Although I wouldn’t say it’s her best performance of 2018 (cough *Sharp Objects* cough), she still proves why she’s one of the best working actors today. Sam Rockwell was also unrecognisable as George W. Bush. He nailed everything about the once President of the United States and it felt like he must have spent months around the real person to perform at this level. I just wish Rockwell was in the film a lot more than he actually was, as this was a really good performance.

Steve Carell stole almost every scene he was in as Donald Rumsfeld. His charisma and subtle comedy were amazing, to the point where he was one of the more likeable characters in the film (even though he made some questionable decisions in the film and real life). 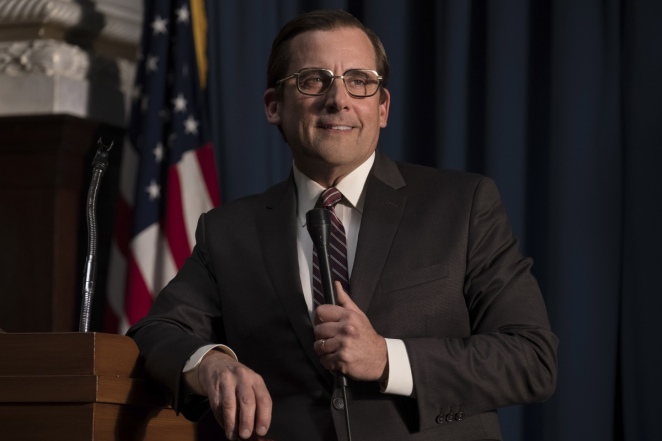 Everyone else from Jesse Plemons as the film‘s narrator, to Tyler Perry as Colin Powell, was terrific.

I may not have mentioned this earlier, but Adam McKay’s writing is also brilliant. As I said before, this is a dark biopic, but there are many smart comedic moments thrown in there as well. A couple of scenes had me in hysterics due to the bizarre and dark nature of them. The dialogue is snappy, and it captivates you for most of the film.

The only real negative I have with Vice is the pacing. Most of the film is paced quite well, but during the middle sections and a little towards the end, it does drag on a little. If it was shortened by about five or ten minutes, it would be so much better.

Overall, Vice is one of the darkest and craziest films of 2018. Adam McKay’s chaotic direction suits the craziness of Dick Cheney’s life and the George W. Bush Presidency. Although there are some pacing issues throughout, the incredible performances, smart writing and non-linear structure make this one of the most unique biopics of all time. Also, can we just be grateful for Christian Bale’s will to gain this much weight for a single role? It really showed off here and he was perfection.